The NATO Air Base Geilenkirchen is located in the heart of the Teverener Heide natural area, near Germany's border with the Netherlands. Between 2012 and 2014, a new administrative facility, an IT training and support facility with data center, was built on the base. ZWP Ingenieur-AG planned the technical building services for the new building, which has been designated "building 320".

The new building 320 is connected via a bridge to building 216, an existing structure. In addition to providing extensive office space, the new building houses server and network rooms (on the ground floor).

In a second construction phase, part of the existing building 216 will be demolished. The remaining part will be extensively refurbished, with a special focus on energy efficiency. The flight simulators housed in that remaining section will remain in operation during the refurbishment process.

Both buildings (320 and 216) will be heated by a combined system consisting of a heat pump and a connection to the district-heating network for the NATO Air Base Geilenkirchen. The design temperatures for the district-heating-based system are as follows: on the primary side, for the supply flow, 115 °C (winter) and 80°C (summer); for the return flow, less than 65°C. The relevant district-heating-distribution station will be connected to the existing facility network (building 216) where possible. The heat pump will draw about 240 kW of the waste heat continually removed from the buildings via the 14 / 18°C cold-water network and will generate a heating output of about 290 kW – including its own waste heat, which will be fed into the system. The output heat, which will be fed into the heating-water circuit at a temperature of about 45°C, will meet about 80% of the buildings' annual heating needs. In rooms with exterior walls in the new building 320, the heating load is distributed via a near-surface concrete core activation that can be used for both heating and cooling purposes.

Cooling is provided by two vapor-compression refrigeration machines, each with an output of 600 kW, or each able to meet about 70 % of the maximum cooling load. That capacity fraction is approximately equivalent to the capacity required for permanent consumers with internal heat sources, such as server and building-services rooms.

The central cooling station is ventilated via an exhaust-air system designed as an emergency venting system without a filter stage and without any thermodynamic treatment functions. It is operated with a constant volume flow. The exhaust air is vented at near-ground level. Intake air for the system enters via openings in the facade and via motor-driven louver dampers.

Cooling loads from the server rooms are removed via central ventilation systems in the basement. To make it possible – for energy-saving purposes – to cool the buildings' rooms with ambient air (free cooling) when outside temperatures are below 20°C, and with suitable air-humidity adjustments, the buildings' central ventilation systems have been equipped with mixing chambers, humidifiers and reheaters.

Electricity for the buildings is provided via the air base's existing 10 KV grid. The new substation has been designed in keeping with the existing capacities in building 216. Building 320, in combination with building 216, has the highest supply priority of all buildings connected to the base's central emergency power supply system. The facility's server rooms are connected to a redundantly designed UPS control center.

The buildings' offices and server rooms are equipped with individual room regulation for heating and cooling, and with presence detectors for control of sun protection and lighting. Lighting is controlled in keeping with daylight brightness. The system is designed to make optimal use of solar radiation in the winter and to prevent excess solar input in the summer. When rooms are occupied, the system automatically switches to a comfort mode that places priority on avoidance of any blinding brightness. In the buildings' public areas, all lighting is LED-based.

Building 320 is also equipped with several structured data networks, in keeping with its additional function as a data center. The networks, which are dedicated to a range of different security levels, include two fiber-optic networks and a Cat7 copper cable system. All windows and exterior doors are monitored by security systems. The main entrance is fitted with individual-admission systems that are also covered by the base's video-surveillance systems. All security-relevant areas are fitted with access-control systems. The security systems also include digital locking cylinders that are compatible with the access-control systems. The facilities are also equipped with a category 2 fire detection and alarm system for areas with high fire loads and with a public address system.

In both the older building, 216, and the new building 320, rooms with high fire loads are protected with gas extinguishing systems. In building 320, the relevant rooms are fitted with a nitrogen extinguishing system. In keeping with VDS guideline 2380, the gas extinguishing systems have been installed as 100% redundant systems. Via area valves, each room can be flooded separately. The flooding system has been designed in keeping with the largest contiguous flooding area / the largest area equipped with fire resistance to F90 standards. Both the rooms and the double floors have been equipped with fire alarms and extinguishing nozzles. In addition, each room has a manual triggering system, an acoustic alarm and a pressure-release louver. 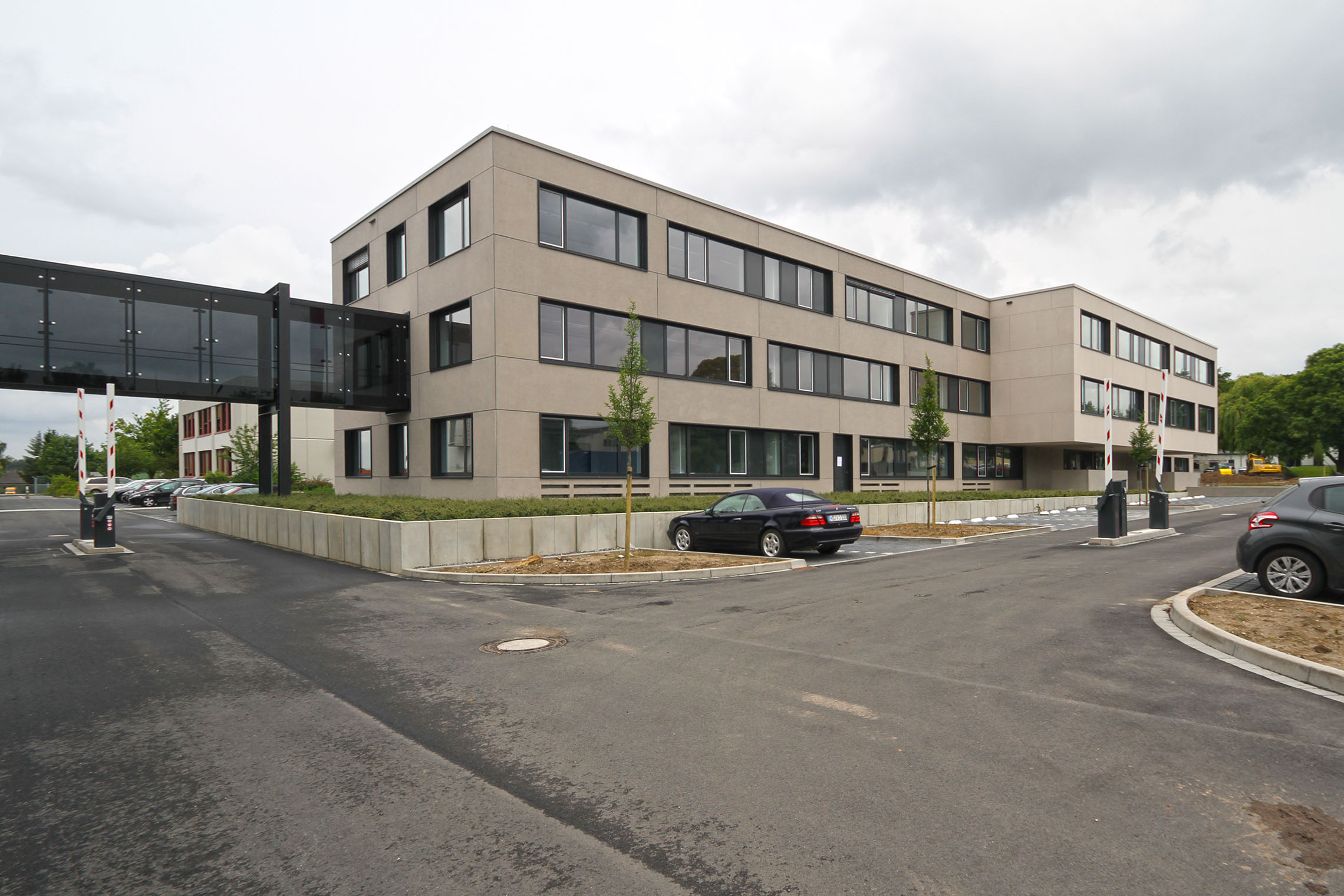