Over the next few years, Merck, a leading science and technology concern operating in the areas of health care, life science and performance materials, plans to expand its main office in Darmstadt, which it has occupied since 1904, into a global group headquarters. The expansion began with the construction of a new, two-story modular innovation center with total floor area of about 4,100 m2. The new facility will play a temporary role; it will be used until the company's future Innovation Center, which is to be the centerpiece of the new group headquarters as of 2018, is completed.

The project's special aspects included the facility's modular design, which allowed for especially fast construction. The first phases of the construction were completed by the end of December 2014, in a total of less than 5 months. Phases 3 and 4 were completed by the end of March 2015. The design divided the structure into transportable segments no larger than 7 x 22 meters. The largest pillar-free room has floor dimensions of 15 x 35 meters. All in all, the innovation center consists of a total of 75 modules, all at least 4 meters tall. Much of the technical building services for the facility were factory-integrated within the modules prior to the final assembly, while control centers and panels for the various systems, and the interconnections between the individual modules, were installed on site. The facility's modular construction, and its use of factory-prefabricated elements, are reflected in the center's rigorous facade grid, with its pronounced joints. Interestingly, a number of innovative Merck products are being tested in the new structure. For example, its west facade incorporates "liquid crystal window" technology, and the structure is equipped with a small PV system.

The rooms within the building are equipped with conventional radiators. Two central ventilation systems (supply and return air) serve the innovation center and guest cafeteria, with air-treatment sections for filtering, heating, cooling and passive dehumidification. The systems conform to the requirements of the German Energy Saving Ordinance (EnEV). When in circulating-air operation, the system optimizes its cooling and heating energy requirements by drawing up to 57 % of its airflow from outside. Heating registers are fed by a gas-fired condensing boiler system, while cooling air is supplied by an air-cooled chiller. The center's kitchen is also equipped with a central ventilation system. All ventilation systems are located on the roof. The foyer and guest cafeteria are lit by round, pendant LED luminaires, while other areas feature round suspended ceiling panels with LED downlights. Lighting is controlled centrally, via a control panel, and automatically adjusted in keeping with the available daylight. 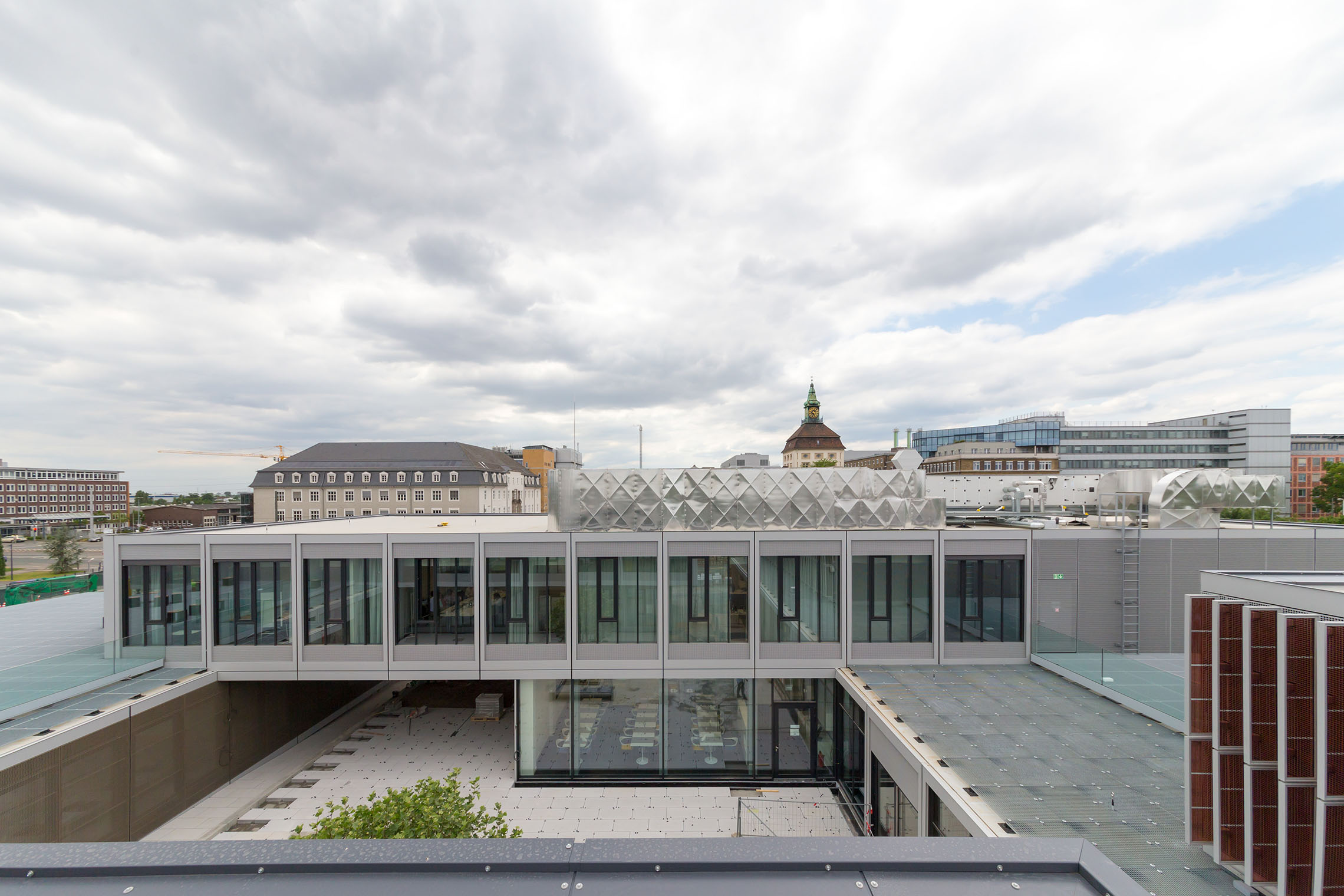